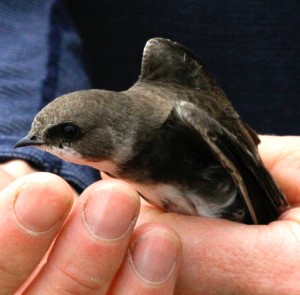 I was walking my dog, Eugene, when I saw in the lake a pair of loons with what I took to be their chick. They were calling to it and following it. I watched but there was something strange about the way the chick moved. It was making jerky movements and it was triangular. I doubled back down the path to the edge of the lake and by the time I got there the chick had swum in almost to shore and that’s when I noticed it wasn’t a chick, it was an adult bank swallow.

I waded into the water and fished it out. Having swum about 100 yds in a lake with water temp of 11°c, it was cold wet and exhausted. I held it in my hand and could feel it had the will to survive.

Back home, I placed it in a box with a soft cloth and a heating pad. What it needed was warmth and chance to rest.

Two hrs later the bird was showing signs of revival. I took it back to the place where I found it. By now it was pretty lively. I lifted it out of the box and released it. Watching it fly off, I saw the other birds fly to join it and then it paired off with one bird, I like to think that was it’s mate; a happy ending.

I wonder if the loons were looking out for it? They seemed to be trying to help. And at the tenacity, courage and strength of such a tiny bird, out of it’s element in a cold lake and managing to swim all that way back to shore.  Amazing. It made my day.

This entry was posted in News.